Until August 29, the Musée Guimet evokes the “way of the warrior”, that of the Japanese samurai from the 9th to the 19th century. Armor, engravings and works of art tell their story and the imagination associated with them. “The Art and the Saber” takes us from Confucius to George Lucas and makes all generations dream.

In its Japanese collection, the National Museum of Asiatic Arts-Guimet in Paris has innumerable representations of samurai, these warrior aristocrats who appeared at the end of the 9th century. ” They were then small armed groups formed around provincial notables at the service of the imperial court of Kyoto. “, specifies Vincent Lefèvre, director of the museum’s collections and curator of the exhibition “The bow and the saber”, which the institution presents until August 29. To mount it, it was enough, therefore, to delve into this very rich background.

These lords gradually gained power over the court nobility and became essential during the Kamakura period (1185-1333) and then the Muromachi period (1336/1378-1573). Then the “way of the warrior” was born (bushido) and the rapprochement between the high warrior aristocracy in the service of the shogun and the imperial nobility. When peace settles in Japan, the samurai get a monopoly on the handling of weapons and transform ” as specialists in the administration of a pre-modern state », as Vincent Lefèvre also explains.

Officers of the Satsuma Fortress (circa 1870) by Felice Beato, featured in the “L’arc et le saber” exhibition at the Guimet museum, 2022 (© Guy Boyer)

Loyalty, fidelity and devotion to death are the precepts of the samurai. This bond with the Lord can go as far as seppuku, the famous suicide by disembowelment to save his honor, which avoids execution in front of the crowd. The samurai is recognizable by his costume: the haori jacket that he wears over the kimono, the wide pants called hakama, the armor, and two swords of different lengths. Apart from Edo period prints showing shoguns with their vassals, the exhibition offers a wide variety of ceremonial helmets, daggers and swords. Among the most amazing helmets, you have to observe in a window those decorated with a rabbit, a snake, a bronze dragon or that of the Wakizawa clan with its neck covering, ruff and horsehair toupee. 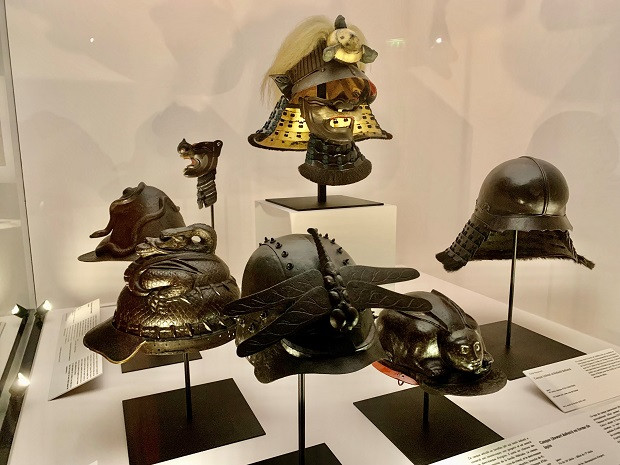 The exhibition explains how the bushido It is not limited to the handling of weapons in the dojo, a space first in the open air and then covered, but it is associated with the culture of scholars with calligraphy, medicine, astronomy and modern Western sciences.

From Confucius to George Lucas

Neo-Confucianism and Buddhism also shaped Samurai culture, especially with the Zen goal of achieving perfect enlightenment through meditation and inner discipline. ” One might be surprised at such an alliance between warriors and a Buddhism that, at first sight, promotes detachment and non-violence.explains Vincent Lefevre. But we must not lose sight of the fact that in the turbulent times of Kamakura and Muromachi, the prospect of an afterlife for those who came close to death almost daily could be seen as a necessary ideal. “. Hence the presence in the exhibition route of the three paths of the samurai: the path of tea (chado), aromatic woods (kodo) and flowers (ikebana), which later evolved into the arts of pleasure. Literature, poetry and nô theater are paradoxically part of the cultural expressions associated with these formidable warriors. Particularly admired are the prints by Utagawa Toyokuni I centered on actors from Kabuki and those of Yashima Gakutei and Utagawa Kunisada that show the actor Ichikawa Danjuro VII in the role of Shibaraku with his monumental suit adorned with white squares on a red background.

Mirrors of kabuki actors (1804) by Utagawa Toyokuni I, featured in the “L’arc et le saber” exhibition at the Guimet museum, 2022 (© Guy Boyer)

The exhibition ends with a chapter dedicated to the image of the samurai in contemporary culture, from manga to Kurosawa cinema. The last wink is a western with Star Wars (1977) by George Lucas with a dark, protective and terrifying Darth Vader with a black helmet. Obviously an exhibition for everyone!

No comments to show.